Posted on December 6, 2012 by thetravellinggourmet

MORE than one thousand years of history can be experienced in magnificent Warwick Castle. Built in 1068 by William the Conqueror, it was the ancestral home of many Earls of Warwick. If you have enjoyed movies of dashing Robin Hood and King Arthur and his swashbuckling Knights of the Round Table, THIS is the kind of mystical castle you see in those movies. It is titanic! There is even a large area by the river where there are displays of Jousting by Knights on horseback as well as a real working Trebuchet which hurled missiles at castles under siege. They did not have 81mm Mortars, howitzers or artillery in those days.

Climb the towers and ramparts…

One of the things I really enjoyed doing was climbing up and down all 530 steps of the dark & narrow spiral staircases to explore the castle’s towers and ramparts. Be warned, it is not for the unfit or those who suffer from claustrophobia. In one area, I was startled by loud coos from a pair of plump pigeons nesting in a dark corner. I thought for a moment it was the cries of a ghostly damsel in distress…At the top of Guy’s Tower, my personal Victorinox Swiss altimeter told me I was 185m high.

A must-see is the KINGMAKER exhibition which tells the tale of Richard Neville, Earl of Warwick but better known as ‘The Kingmaker’. The fascinating exhibits show the frantic preparations for the Battle of Barnet in the Spring of 1471. You can see the blacksmith preparing and making the protective armour, while the arrow maker gets the sharp and deadly arrows ready for action. The famed English longbows are carved from the Yew tree. The best archers could fire 15 arrows a minute! There is also a medieval cannon with cannonballs made from cast iron or carved sandstone. One cannonball weight 7kg! 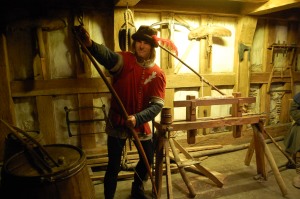 After exploring the marvellous castle I felt a rumbly in my tumbly so I headed to the Undercroft Carvery and met Harriet the friendly Manager. A yummy lunch of moist Bacon slices, meaty Turkey with Sage & Onion Stuffing, lashings of rich gravy, well roasted hunky golden potatoes, crunchy Brussel Sprouts, tender green Peas & naturally sweet Carrots was most delightful! The piece de resistance is undoubtedly the dark amber brown Yorkshire Pudding with its crispy outside and fluffy innards…to soak up all the absolutely yummy Beef jus and rich appetising gravy…

The tour of the castle & state rooms with Ryan the friendly guide narrating, is also very enlightening. In the Green Drawing Room, I was amazed by the life sized exhibit of gargantuan King Henry VIII and his many wives, of whom some were beheaded, others divorced and thankfully, some survived! They were the ones on whom fortune smiled. Look out for the cleverly hidden secret door in the far corner on the right where legend has it, William the 7th Lord Brooke brought the maid servant who he had made pregnant, kicked her down the spiral staircase behind the secret door, and then drowned her in the river! All this because he did not want to have an illegitimate heir to his title. What a blackguard! The fabulous Great Hall is also a history lesson in itself with a carving called a buffet made from a single oak tree telling the romantic tale of Queen Elizabeth I and her paramour, Robert Dudley. You can marvel at the small carved figure of the Queen about to slap Robert Dudley on his knees for marrying another woman before she could marry him. What a fool!

There are also collections of Arms & Armour with the German Armour being the most renowned & well made and also ancient firearms like the Matchlock and the Flintlock. 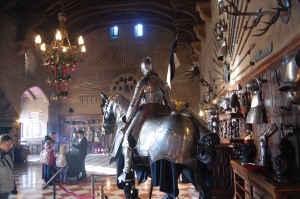 Another highlight is this interactive attraction which has Hollywood style SFX (Special Effects) and magic!  In the magician Merlin’s enchanted Tower you also get to meet the wise Fire-breathing Dragon. The Dragon chose me to go for training as a Knight in shining armour to defend Camelot and told me sagely, “There is a nobility about you…”

Scandalous tales of seductive ‘Daisy’ Countess of Warwick who entertained the elite of Victorian society in Warwick Castle,  including the casanova Prince of Wales, later King Edward VII. ‘Daisy’, the Countess of Warwick is most certainly the ‘Lola Montez of England’! Lola Montez was the notorious ‘femme fatale’ who brought down the King of Bavaria. Daisy even had a torrid love affair with Winston Churchill’s father, Lord Randolph Churchill, Furnishings and fittings are the real ones from that time period! 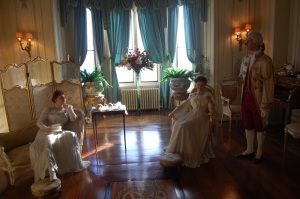 The Prince of Wales was a notorious philanderer and the Countess of Warwick was but one of his many paramours. Incredibly, the Count of Warwick turned a blind eye to all the amourous shenanigans of his wayward wife. In the Carnation Bedroom you can see Field Marshall Lord Roberts getting ready for the evening’s festivities. He won the Victoria Cross twice during the Indian Mutiny. Was he involved with Daisy too? Nudge, nudge, wink, wink. In Daisy’s bedroom, you can see her trying on a new expensive gown in virginal white…Oh La La! One of life’s little ironies. They were all incredibly promiscuous in those days with passionate love affairs and adultery going on all the time! C’est l’amour…OMG! My flabber was absolutely gasted!

Visit Warwick Castle soon. It is one helluva of place! I can’t wait to come back.

As a renowned Travel, Food & Wine Writer he has travelled the world in a keen & indomitable pursuit of exotic delicacies & fine wines. His articles have been published in over 20 prestigious publications, both local & international. Dr. Lim has toured and trained in Wine Evaluation & Oenology in most of the world's top wine producing areas from France to Australia. The Travelling Gourmet says, "Gastronomy has no frontier. These are the gastronomic voyages of The Travelling Gourmet. My unending mission. To explore strange new cuisines, to seek out new wines and new culinary experiences, to boldly go where no gourmet has gone before...." Have pen, will travel. All rights reserved. No part of this publication may be reproduced or transmitted in any form or by any means, electronic or mechanical, including photocopy, recording, or any other information storage & retrieval system, without permission from Dr. Michael Lim The Travelling Gourmet and/or MSN. Material may be works of fiction. Names, characters, places and incidents may be true but may also be products of the author's imagination or are used fictitiously. Any resemblance whatsoever to actual person or persons, either dead or living, events, or locales may be entirely and purely coincidental and unintentional. No part of this website may be used to villify others or for criminal purposes. Interests: Travel, Food, Wines, Cooking, Wine Appreciation, Parachuting, Languages, Music, Reading, Swimming, Hunting, Ballet, Fencing, Archery, Anthropology and more... The Travelling Gourmet is a copyrighted trademark. All rights and photos reserved. No part may be reproduced without permission.
View all posts by thetravellinggourmet →
This entry was posted in Entertainment, Food and drink, Nobody's perfect..., Travel and tagged Battle of Barnet, dr michael lim, English longbow, english longbows, Henry VIII of England, king arthur and his knights of the round table, KINGMAKER, kingmaker exhibition, Richard Neville 16th Earl of Warwick, Warwick, Warwick Castle, Yorkshire Pudding. Bookmark the permalink.