Posted on May 17, 2014 by thetravellinggourmet

Story and photos by Dr. Michael Lim The Travelling GourmetTM

MUNCH and savour as you celebrate the “Duan Wu Jie” or Dragon Boat traditional Dumpling Festival! The Festival is from 2 May to 2 June, 2014.

The Dumpling Festival (“Duan Wu Jie”) is a colorful festival celebrated by Chinese worldwide on the 5th day of the 5th month of the lunar calendar. During this period, Chinese will feast on many types dumpling called “zong zi”.

Why eat dumplings and take part in Dragon Boat races?

The legend behind theDumpling Festival goes like this… …Once upon a time n ancient Chiina, there was a Chinese poet by the name of “Qu Yuan” who served the emperor in the time of the Chu Kingdom. He was a good minister and was well loved by the people. However, evil court officials were jealous of Qu Yuan’s abilities and they successfully influenced the weak-minded emperor to dismiss and exile him.

Feeling disheartened, depressed and angry, Qu Yuan tied himself to a rock and jumped into the Mi Luo river in Hunan province in order to protest against injustice and corruption. When the people got to know of his death, they rowed their boats to the river to look for his body. When they failed to find his body, they started beating their drums and making loud noises on the river banks hoping to scare the fishes away so that they would not feed on his body. Still others started making rice dumplings to throw into the river hoping that the fishes will eat their dumplings instead of Qu Yuan’s body. Somewhat naive, but the emotions were heartfelt and sincere.Since then, the 5th day of the 5th month of lunar calendar was mmortalised as “Duan Wu Jie” ( Dumpling Festival) to commemorate Qu Yuan. Dragon Boat races commemorate the search for Qu Yuan after he jumped in to the river…
Personally, I detest the concept of martyrdom as being extremely negative and foolish…However I do love dumplings!
Pan Pacific Dumplings

I really like the Chinese Herbal Salted Chicken Dumpling by Chef Lai Tong Ping of the Pan Pacific Hotel. Tasty Chicken thigh and Thai premium glutinous rice all wrapped up in a big pillow like dumpling is a meal in itself! An not overly salty or oily either! I recommend this to meat and chicken lovers. Pan Pacific’s Traditional Cantonese Dumpling with chunky Belly Pork, Shitake Mushroom, cute Mung beans and Chestnut is also a delight to eat! The rice is infused with the aroma of the bamboo leaves. Below is a photo of Pan Pacific’s Chinese Herbal Salted Chicken Dumpling… 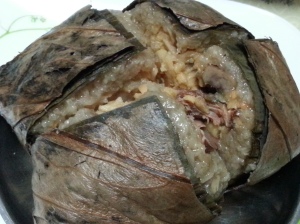 As a renowned Travel, Food & Wine Writer he has travelled the world in a keen & indomitable pursuit of exotic delicacies & fine wines. His articles have been published in over 20 prestigious publications, both local & international. Dr. Lim has toured and trained in Wine Evaluation & Oenology in most of the world's top wine producing areas from France to Australia. The Travelling Gourmet says, "Gastronomy has no frontier. These are the gastronomic voyages of The Travelling Gourmet. My unending mission. To explore strange new cuisines, to seek out new wines and new culinary experiences, to boldly go where no gourmet has gone before...." Have pen, will travel. All rights reserved. No part of this publication may be reproduced or transmitted in any form or by any means, electronic or mechanical, including photocopy, recording, or any other information storage & retrieval system, without permission from Dr. Michael Lim The Travelling Gourmet and/or MSN. Material may be works of fiction. Names, characters, places and incidents may be true but may also be products of the author's imagination or are used fictitiously. Any resemblance whatsoever to actual person or persons, either dead or living, events, or locales may be entirely and purely coincidental and unintentional. No part of this website may be used to villify others or for criminal purposes. Interests: Travel, Food, Wines, Cooking, Wine Appreciation, Parachuting, Languages, Music, Reading, Swimming, Hunting, Ballet, Fencing, Archery, Anthropology and more... The Travelling Gourmet is a copyrighted trademark. All rights and photos reserved. No part may be reproduced without permission.
View all posts by thetravellinggourmet →
This entry was posted in Food and drink, Gourmet cuisine, History, Hotels & Resorts and tagged Dumpling Festival, Pan Pacific. Bookmark the permalink.