Have Pen, Will Travel…

Posted on October 15, 2014 by thetravellinggourmet

The indomitable Travelling GourmetTM tells you something about himself…

MY ‘nom de plume’, The Travelling Gourmet was given to me by my good friend, Mazlan who was the Editor of Drive magazine, when he asked me to start a food and wine column in Drive Travel & Leisure. My column was aptly named: The Travelling Gourmet TM. It was a fly off the shelves super successful magazine available at ALL gas stations nationwide. Later I had to get my ‘nom de plume’ trademarked because there were imposters appearing! People with no original ideas of their own always feel compelled to steal the ideas of others. My lawyer told me, “Once you have your trademark, I’ll sue those who infringe it!” Beware of imposters!

As a renowned and respected Travel, Food & Wine Writer he has travelled the world in a relentless pursuit of exotic delicacies and fine wines. He also covers Lifestyle and Golf. His articles have been published in over 20 prestigious publications in the print and electronic media, both local and international. The Travelling GourmetTM is the “Reuters” of lifestyle and gastronomy supplying features to numerous media, both print and electronic worldwide.

Dr. Lim has toured and trained in Wine Evaluation & Oenology in many of the world’s top wine producing areas from France to Australia and Austria. The Travelling Gourmet also gives Wine appreciation lectures and Masterclasses by special request. He has been specially commissioned by the Argentinian, Romanian, Spanish, Thai and Italian governments to give Wine lectures and seminars about their respective wines. The Travelling Gourmet is the Food & Wine Consultant to the Thai and Spanish Embassies, respectively. Dr. Lim was the Wine Consultant to the Romanian Embassy. He has also been commissioned by Cathay Pacific Airlines, Turkish Airlines, the Le Meridien chain of hotels, Mandarin hotel and other 5 star hotels to organize & give Wine Appreciation Masterclasses and Dinners. Dr. Lim has also conducted Wine Appreciation talks, Masterclasses and seminars for Singapore’s top wine merchants and prestigious organisations like Massotina, Excaliber, Bisol of Italy, Nardini Grappa (Italy’s oldest and most distinguished Grapparia), Bacardi-Martini, Landmann of Germany, UBS of Switzerland, Le Meridien Hotels and many others.

Dr. Lim has been trained by famed  and illustrious experts in the Food, Wine and Hospitality industry including outstanding 3 Michelin star Chefs. The Travelling Gourmet has also given Cooking demonstrations and classes for Le Creuset of France (France’s top cookware company used by many professional chefs) and Scanpan of Denmark (Europe’s largest manufacturer of pressure cast aluminium cookware). He has also given cooking and wine shows on RazorTV of Singapore which is Singapore’s first online TV service. Dr. Lim has served as Food & Wine Consultant to Tourism Malaysia & was a Wine Judge at the Alsace meets Asia Culinary Challenge 2004, 2005 & 2006. Dr. Michael Lim has served as a Wine Judge at the prestigious Concorso Enologico Internazionale International Wine Competition – Vinitaly in 2005 and 2006 held in Verona, Italy. The Concorso Enologico Internazionale is the world’s largest wine competition while Vinitaly is the world’s largest exhibition of wines and spirits. The Travelling Gourmet was also sent by the Italian government to cover Vinitaly 2014. Dr. Lim was also a Wine Judge at Vinexpo 2006 in Hong Kong. The Travelling Gourmet was also a Wine Judge in Italy’s prestigious National Competition Charme Sommelier 2008 organised by AIS (Association of Italian Sommeliers). Dr. Lim was a Judge at the Marriott Cocktail Competition 2010. The Travelling Gourmet was the official journalist and consultant to the Italian Chamber of Commerce in Singapore Certification Italian Wine Course 2010. The Travelling Gourmet was the Contributing Editor to “Eat Me!” The Singapore Food & Entertainment Guide. Dr. Lim is an Editor for the international Dining guide Chef Moz, and also writes for the famous ZAGAT international Food, Restaurants, Hotels & Airlines Guides. The Travelling Gourmet created the gastronomy section of Affluent magazine and was the Gastronomy & Wine Editor, the top regional magazine for very high net worth individuals at that time. The Travelling Gourmet was the Consultant and official journalist to the 1st Grand Gourmet Summit in Dubai in November 2005 held in the Grand Hyatt Dubai. Dr. Lim was a finalist in the prestigious World Gourmet Summit Awards of Excellence Mont Blanc Food Writer of the Year Award 2011, 2012 & 2014.

Dr. Lim has also appeared on Razor TV to do a series of cooking shows featuring his original recipes as well as shows on wines & food. Razor TV is Singapore’s first online television service owned by SPH, the publishers of Singapore’s national newspaper, The Straits Times.

A very good friend to many famous Chefs around the world like Philippe Legendre, Alain Soliveres, Paul Bocuse, Anne-Sophie Pic, Angelo Sabatini, Tetsuya, Anton Edelmann, Alfred Buxbaum the Executive pastry Chef for the renowned Sacher-Torte of the Hotel Sacher in Vienna, Ferran Adria, Wayne Hirabayashi, Michel Roux, Thomas Bühner, David Thompson, Heinz Beck of La Pergola in Rome, Raul Balam of Barcelona, Antonella Ricci, Marco Pierre White, Hubertus Real of Leichtenstein and Martin Yan, Dr. Lim is known as “Der reisende Feinschmecker” in Austria, Germany and Switzerland. The Travelling Gourmet has also graduated from special training courses on Oenology, Wines and Cuisines at the world famous Culinary Institute of America (CIA), the world’s premier University of the Culinary Arts, the Harvard of Haute Cuisine. He has also undergone special intetraining by many renowned 3 Michelin star chefs. The Travelling Gourmet has trained at The Thai Cooking School of the famous Oriental Hotel in Bangkok & Chiangmai. Dr. Lim has trained in Balinese cuisine at the celebrated Bumbu Bali School of Balinese cuisine under Chef Heinz von Holzen. He has also trained with Chef Marc Chalopin of Le Cordon Bleu Paris & at LeNotre Culinary School in Paris. Dr. Michael Lim has also undergone special culinary training by Chef Philippe Legendre of the 3 Michelin Star Le Cinq restaurant in Paris. Also trained in Vietnamese cuisine by the Executive Chef and  of the superb Hyatt Regency Danang, Vietnam. Also special training in Vietnamese cuisine by the Chefs of the Caravelle in Saigon. The Travelling Gourmet is also a certified Coffee Barista, and has had special training in French Patisserie by Chef Felicien.

Dr. Michael Lim The Travelling Gourmet says, “From Mont Saint Michel to Gravina di Puglia, there is always something new and exciting to learn about food and wine!”

The Travelling Gourmet is a copyrighted trademark, all rights reserved

The Travelling Gourmet on RazorTV

Dr. Michael Lim The Travelling Gourmet was the 1st Chevalier of the Confrerie du Sabre d’Or in Singapore, and the only Chevalier for many years.

My Cooking Show on Razor TV 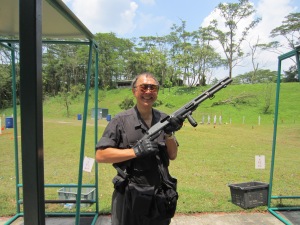 I was very happy to receive this email from Tripadvisor today. Tripadvisor is read by over 350 million travellers around the world! 🙂

As a renowned Travel, Food & Wine Writer he has travelled the world in a keen & indomitable pursuit of exotic delicacies & fine wines. His articles have been published in over 20 prestigious publications, both local & international. Dr. Lim has toured and trained in Wine Evaluation & Oenology in most of the world's top wine producing areas from France to Australia. The Travelling Gourmet says, "Gastronomy has no frontier. These are the gastronomic voyages of The Travelling Gourmet. My unending mission. To explore strange new cuisines, to seek out new wines and new culinary experiences, to boldly go where no gourmet has gone before...." Have pen, will travel. All rights reserved. No part of this publication may be reproduced or transmitted in any form or by any means, electronic or mechanical, including photocopy, recording, or any other information storage & retrieval system, without permission from Dr. Michael Lim The Travelling Gourmet and/or MSN. Material may be works of fiction. Names, characters, places and incidents may be true but may also be products of the author's imagination or are used fictitiously. Any resemblance whatsoever to actual person or persons, either dead or living, events, or locales may be entirely and purely coincidental and unintentional. No part of this website may be used to villify others or for criminal purposes. Interests: Travel, Food, Wines, Cooking, Wine Appreciation, Parachuting, Languages, Music, Reading, Swimming, Hunting, Ballet, Fencing, Archery, Anthropology and more... The Travelling Gourmet is a copyrighted trademark. All rights and photos reserved. No part may be reproduced without permission.
View all posts by thetravellinggourmet →
This entry was posted in Art, Fabulous Food and Gorgeous Drinks, Gorgeous Wines!, Gourmet cuisine, Hobbies, Let them eat Cake..., Nobody's perfect..., Philosophy, The Travelling GourmetTM cooks..., Travel, Voyages and tagged Dr. Michael Lim is The Travelling GourmetTM, Have pen will travel, The Travelling GourmetTM, Top 1% of Tripadvisor reviewers, Tripadvisor. Bookmark the permalink.

1 Response to Have Pen, Will Travel…