Posted on November 4, 2020 by thetravellinggourmet

MEMORABLE Sean Connery who is undoubtedly the quintessential James Bond. Surrounded by his family he passed away peacefully in his sleep on 31 October 2020 in his home in the Bahamas.

A true-blue Scotsman, Sean Connery who supported Scottish Independence from the United Kingdom was born in Edinburgh on August 25, 1930. His humble origin featured a mother who was a cleaning lady, while his father worked in a factory. Who would have thought he could end up being ueber-famous as the gentleman spy 007 with a licence to kill? Connery dropped out of school and joined the Royal Navy. He acquired two tattoos emblazoned on his right forearm in the Royal Navy, which read “Mum and Dad” and “Scotland Forever”. Three years later he was medically discharged because of stomach ulcers. Sean then worked as a milkman, coffin polisher, bricklayer and lifeguard in Edinburgh. It was his hobby as a 6 foot 2 inches body builder that led to his big break in show business. Connery entered the Mr. Universe contest where he came third. A fellow contestant urged him to audition for acting parts. He got a part in the chorus in “South Pacific”. Other small roles followed in the movie melodrama “Another Time, Another Place” (1958), and in the Alfred Hitchcock movie  thriller “Marnie” (1964). IN “Marnie” Sean’s potential as a romantic leading man was noticed.

He caught the eye of Cubby Broccoli’s while screening Darby O’Gill in Los Angeles. Broccoli had previously met Connery while the young actor was filming Another Time, Another Place (1958). This was a movie where Connery physically disarmed a real-life gangster who started waving a gun around on set. Broccoli liked Connery, so did Terrence Young, who would direct the first-ever theatrical James Bond picture, Dr. No.

So one day Broccoli sat in a private screening room in LA to watch Connery’s Walt Disney debut. In that movie, Connery played Michael McBride, a young lad with eyes for his “darling Irish girl,”(Janet Munro played love interest Kati O’Gill. It was a supporting role in the Disney Gaelic folktale movie about pots of gold, banshees, leprechauns and ghostly carriages headed for the afterlife. Cubby Broccoli “thought he saw something worthwhile.” Cubby reached out to his wife Dana Broccoli. He asked if this Connery fellow had much sex appeal. “Yes.” was the answer. Dana encouraged her hubby Cubby to cast Connery as 007. The deal was sealed at another meeting with Harry Saltzman. After the meeting, Saltzman and Broccoli watched Connery cross the street from their window, Saltzman observed, “[He moves] like a big jungle cat.” He also had “dark, cruel good looks” which was the way Ian Fleming described James Bond in his books. The rest is cinema history and legend.

Diamonds are Forever is one of my favourite Bond movies with the tile song sung by inimitable Dame Shirley Bassey.

Always with a caesura (a pause in the middle of a line) for emphasis. The classic line, “The name’s Bond…James Bond.”

Needless to say, 007 brought Sean Connery fame and great fortune.  He was paid a mere £6,000 for Dr No and then four times that amount for From Russia With Love. For his first Bond “comeback” in 1971’s Diamonds Are Forever, Sean got  a then-record US$1.25 million! Wow! Nicht schlect (not bad) for a former milkman with no University education. Sean Connery donated his pay cheque for ‘Diamonds are Forever’ to set up the Scottish Education Trust. The Trust is to help young actors. In the Bond movies his charismatic and commanding screen presence was unforgettable. Connery’s riveting portrayal of the MI6 Intelligence officer as a passive-aggressive charming man of the world, with a taste for beautiful women, gourmet cuisine and fine wines wowed the audience worldwide. Who can forget the really ravishing Bond girls from Honor Backman to Shirley Eaton to Ursula Andress and more. Swoon…All red- blooded men have a weakness for beautiful women n’est pas.

Connery also captured perfectly the ruthless violent edge and dark side of 007 when he had to dealt with the bad guys. As the George Orwell (1984) saying goes, “

“We sleep soundly in our beds, because rough men stand ready in the night to do violence on those who would harm us”

Thunderball: I think he got the point.

For Queen and Caviar

Terence Young the director of three of Connery’s six Broccoli and Harry Saltzman-produced Bond adventures, actually lived some of the adventures that were the hallmark of the Bond movies. Young was wounded twice fighting as a Tank Commander in the Second World War, After the war, Young acquired a taste for adventure and the high life. Young took the young Scottish actor under his wing. It was Young who introduced Connery to the legendary Turnbull & Asser to select custom designed shirts with turnback cuffs (better for quicker undressing OMG!) Young who got his personal tailor, Anthony Sinclair, to cut all of Connery’s Dr. No suits. Terence Young also brought Sean Connery to all the finest restaurants in London’s Mayfair area like Scott’s, (also one of my favourites)  and taught Sean how to order wine, judge fine champagne, appreciate “haute cuisine” and move with panache and savoir faire in society crowds.

Another amazing scene from Goldfinger. The angelic “butter won’t melt in my mouth” look on 007’s face as his explosive charges blow up just warms the cockles of your heart with a chuckle. So too is the sardonic line, “Shocking…positively shocking.” A classic double entendre.

Macho Connery received numerous honours, including being chosen as Commander (the same rank as Bond) of France’s Order of Arts and Literature and a Kennedy Center honoree in 1999. In 2000, Queen Elizabeth II proclaimed him a British Knight of the Realm in Holyrood Castle, Scotland, for services to film drama. In 2005 he was chosen for a lifetime achievement award by the American Film Institute.

Kill or be killed in From Russia with Love

Connery also found success in films like the 1974 ensemble mystery Murder on the Orient Express, the sweeping epic adventure movie The Wind and the Lion and John Huston’s The Man Who Would Be King, both released in 1975. The elegant love story Robin and Marian, in which he portrayed Robin Hood to Audrey Hepburn’s Maid Marian was another winner.

Many thanks to Star in the Sky for kindly suggesting that I write this feature {:-)

James Bond’s original Walther PPK 7.65mm pistol is up for auction in Los Angeles on December 3, 2020.  Originally owned by actor Bernard Lee who played “M” the boss of James Bond in 11 movies from 1962 to 1979. Alas it is deactivated with no firing pin. It is expected to fetch 80,000 Pounds or more. 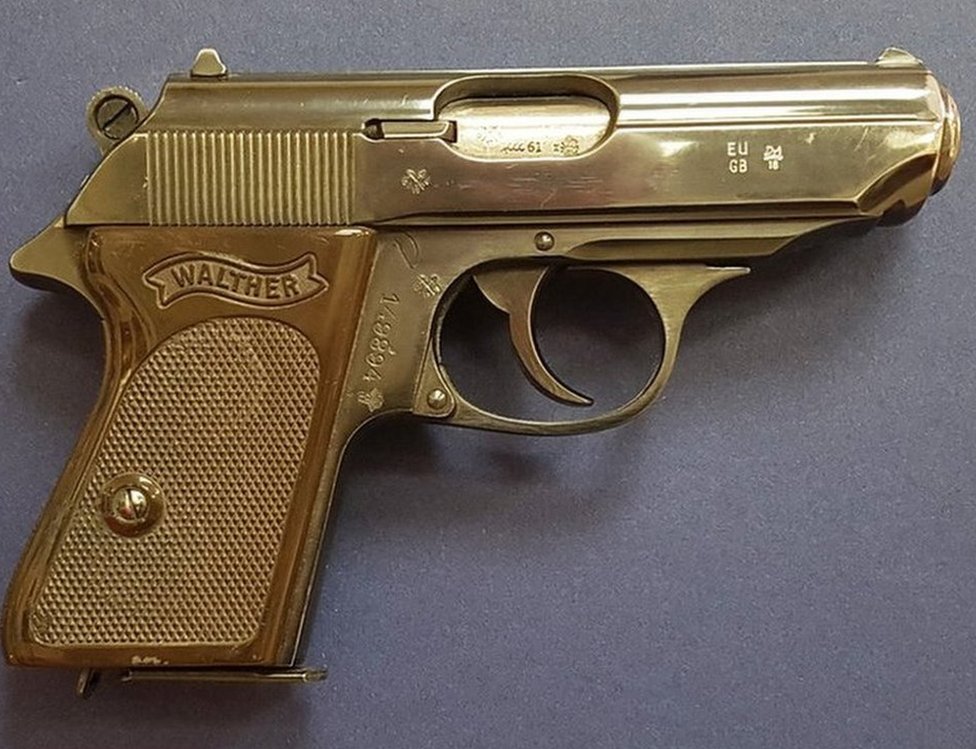 As a renowned Travel, Food & Wine Writer he has travelled the world in a keen & indomitable pursuit of exotic delicacies & fine wines. His articles have been published in over 20 prestigious publications, both local & international. Dr. Lim has toured and trained in Wine Evaluation & Oenology in most of the world's top wine producing areas from France to Australia. The Travelling Gourmet says, "Gastronomy has no frontier. These are the gastronomic voyages of The Travelling Gourmet. My unending mission. To explore strange new cuisines, to seek out new wines and new culinary experiences, to boldly go where no gourmet has gone before...." Have pen, will travel. All rights reserved. No part of this publication may be reproduced or transmitted in any form or by any means, electronic or mechanical, including photocopy, recording, or any other information storage & retrieval system, without permission from Dr. Michael Lim The Travelling Gourmet and/or MSN. Material may be works of fiction. Names, characters, places and incidents may be true but may also be products of the author's imagination or are used fictitiously. Any resemblance whatsoever to actual person or persons, either dead or living, events, or locales may be entirely and purely coincidental and unintentional. No part of this website may be used to villify others or for criminal purposes. Interests: Travel, Food, Wines, Cooking, Wine Appreciation, Parachuting, Languages, Music, Reading, Swimming, Hunting, Ballet, Fencing, Archery, Anthropology and more... The Travelling Gourmet is a copyrighted trademark. All rights and photos reserved. No part may be reproduced without permission.
View all posts by thetravellinggourmet →
This entry was posted in Art, Fabulous Food, Fabulous Food, Gorgeous Wines!, Food and drink, Friends & Comrades, Gourmet cuisine, History, Hobbies, Let them eat Cake..., Movies, News and politics, Philosophy, The Tough Cookie and tagged Champagne and Caviar, Cubby Broccoli, Diamonds are forever, Dr. Michael Lim is The Travelling Gourmet TM, Dr. No, Edinburgh, From Russian with Love, George Orwell 1984, Goldfinger, Harry Saltzman, Ian Fleming, James Bond 007, Scott's of Mayfair, Sean Connery. Bookmark the permalink.