Posted on November 24, 2011 by thetravellinggourmet

MAMA mia! On 22 November, 2011, Kunihiro Oysters from Hiroshima in Japan was officially launched in sunny Singapore!

I ambled into Kuriya Penthouse restaurant perched on top of Orchard Central to be warmly greeted by my friend, Koezuka Yoshihiko who is the Master Chef and GM of the restaurant.

On the buffet line was…Kunihiro Oysters, and more Oysters!

The best way to over come temptation is to give into tempatation…and so I did.

Paired with a Dourthe Beau Mayne Sauvignon Blanc from Bordeaux, I savoured Oysters Sashimi on the half shell…heavenly! Master Chef Koezuka appeared with a happy smile, “Dr. Lim-san, I want you to try this special wine from Nagano prefecture in Japan with the oysters!”

It was a barrel fermented Chardonnay 2009 from the Yamabe Winery in Japan! Its buttery nuances from malo-lactic fermentation, deep gold colour and notes of vanilla from oak treatment went hand in glove with the oysters. It was especially yummy with the deep fried Breaded Oysters in Tempura Style. The flavours of the ocean were claerly enhanced by the wine. It is wonderful to bite through the crunchy tempura crust into the plump, sensuous oyster insides…the creamy almost milky flavours play on your palate like a violin. I relished so  many oysters I lost count…and I felt like Casanova who always ate 144 oysters before embarking on his romantic escapades! Yes, it is absolutely true that oysters have aphrodisiac qualities.

A new study by American and Italian chemists claims that as far as oysters, clams and mussels are concerned, the ancient claim that oysters are aphrodisiac may be true. Their finding was presented on March 16, 2006 at the American Chemical Society annual meeting in San Diego, USA.

“The supposition for centuries was that oysters, clams and mussels have been thought to have aphrodisiac properties,” said researcher George Fisher, a professor of chemistry from Barry University, in Miami Shores, Fla. “And they were eaten raw for that purpose.”

Until recently, there was no scientific basis for that belief, Fisher added. But what he and his colleagues have discovered is that mussels, clams and oysters contain compounds that have been shown to be effective in releasing sexual hormones such as testosterone and estrogen. These compounds are D-aspartic acid and NMDA (N-methyl-D-aspartate).

“We found there might be a scientific basis for the aphrodisiac properties of these mollusks,” Fisher said.

I was also honoured to meet dapper and friendly Ikuzo Kawasaki, the President of Kunihiro Inc., who produces these lovely oysters. He is on the extreme right of the photo. Masterchef Koezuka is on my right. 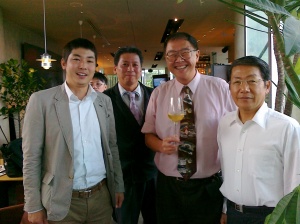 A word about Kuriya Penthouse: I recommend this warm and intimate rooftop restaurant that offers falcon’s eye views of Orchard Road and its environs. Incidentally, Kuroya means ‘kitchen’ in Jpapanese.The Kaiseki-style Japanese cuisine changes with the 4 seasons. As a bonus, after dinner, you can chill out in the breezy outdoor terrace with a Guatemalan cigar and Hennesy XO cognac… Oishi ne!

Children below 6 not encouraged.

As a renowned Travel, Food & Wine Writer he has travelled the world in a keen & indomitable pursuit of exotic delicacies & fine wines. His articles have been published in over 20 prestigious publications, both local & international. Dr. Lim has toured and trained in Wine Evaluation & Oenology in most of the world's top wine producing areas from France to Australia. The Travelling Gourmet says, "Gastronomy has no frontier. These are the gastronomic voyages of The Travelling Gourmet. My unending mission. To explore strange new cuisines, to seek out new wines and new culinary experiences, to boldly go where no gourmet has gone before...." Have pen, will travel. All rights reserved. No part of this publication may be reproduced or transmitted in any form or by any means, electronic or mechanical, including photocopy, recording, or any other information storage & retrieval system, without permission from Dr. Michael Lim The Travelling Gourmet and/or MSN. Material may be works of fiction. Names, characters, places and incidents may be true but may also be products of the author's imagination or are used fictitiously. Any resemblance whatsoever to actual person or persons, either dead or living, events, or locales may be entirely and purely coincidental and unintentional. No part of this website may be used to villify others or for criminal purposes. Interests: Travel, Food, Wines, Cooking, Wine Appreciation, Parachuting, Languages, Music, Reading, Swimming, Hunting, Ballet, Fencing, Archery, Anthropology and more... The Travelling Gourmet is a copyrighted trademark. All rights and photos reserved. No part may be reproduced without permission.
View all posts by thetravellinggourmet →
This entry was posted in Fabulous Food, Gorgeous Wines!. Bookmark the permalink.